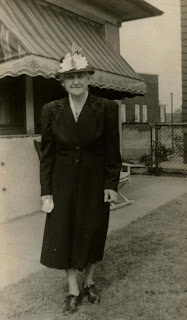 L ulu cried out for recognition every time I glanced at her. Her constant stare urged me to discover what was at the core of the mystery of her purposeful anonymity. She had been silenced through years of other people’s pain. I wanted to bring her to life, let her speak, and then lay her to rest…in peace. When was she born? Did she really die of pneumonia?…was that all there was to it? Why so young? What was her story? My questions to my mother were met with the same repetitive, “I don’t remember." There seemed to be something more…something darker…something hidden. A sadness surrounding her death continued to loom through the years.

In desperation, I drew anecdotal information out of the depths of Mom’s memory; I grabbed her hand and walked her down memory-lane. She gladly spoke of her childhood; the places she went, the people she knew; her grandfather Edwin, “Grandpa,” and his second wife, May, who conveniently stepped into Lulu’s place hard by her death; how she used to help clean their house after school. Her mother, Adele, had been Grandpa’s only child and my mother his favorite grandchild. Then, one day, she mentioned Grandma Gonder. Who was this? She recalled how her mom occasionally took her there to visit. Could this could be Lulu’s mother? Suddenly the woman who only had a nickname was close to having a last name.

Mom disappeared to find a picture of Grandma Gonder; when she returned she was carrying two items. The first was a photo of a pleasant looking woman dressed in an embroidered black coat and embellished hat, Grandma Gonder. The picture did not give me any further clues, but it was heartwarming to know that this was Lulu’s mother; it breathed a bit of life into her story. As I looked into the eyes of the woman who smiled back at me I could see Lulu. Perhaps Lulu would have looked like her if only she had lived longer; I sighed. As I was pondering the “if onlys,” my mother handed me the other item she had discovered. Just as one clue leads us to another, Mom’s search for the picture led her to find a document as she was rummaging through the box of old photos. It was a V-mail from WWII written to her mother, Adele. It said nothing of Lulu or Grandma Gonder. The details of the letter did not appear helpful for the search of Lulu's story…that was until I looked at the closing. The person who signed and how he closed was perplexing. Though it was not evident at the moment, the author of the V-mail would elucidate a large part of the mystery. (To be continued…)
Posted by LegacyRoots at 5:13 PM 0 comments 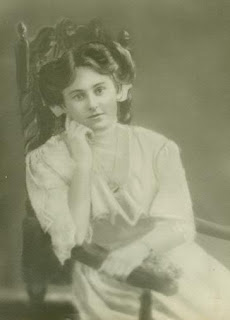 One day I happened to notice a copy of a wax-like photograph on a table in my mom and dad’s house of a beautiful young woman with a Gibson Girl style hairdo seated on a chair. There was something very intriquing about her and I inquired as to who she was. My mother explained that she was her real grandmother known only as "Lulu," while her step-grandmother was the only one that she had known growing up. Further inquiry brought very little satisfaction since my mother seemed to relate that she didn’t even know the woman’s last name. The extent of her knowledge beyond her given name was that she died of pneumonia while she was very young and it was a painful memory for her grandfather who apparently loved her very much. As I stared at the beautiful face that seemed to stare back at me I felt the need to discover who she was and where she was now resting. She deserved to be known. What I didn’t know was that there were more secrets to be uncovered other than just this woman’s identity. To be continued....
Posted by LegacyRoots at 10:45 PM 2 comments