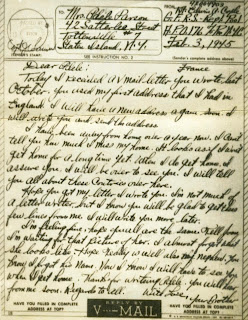 I held the V-mail in my hands noticing the sender's name, Edwin A. Coyle. As my eyes dropped to the closing, the words stared back at me "With Love, Your brother.” I had never heard any one mention that my grandmother had a brother. My mother’s nonchalant response to my inquiry surprised me. She knew that her mother had a brother; she had seen him sporadically…or maybe only once or twice…she had just forgotten about him. Forgotten about him? I wondered if there had been some incident where he had fallen out of favor with the family. Questions loomed in my head…was he older than Adele? Was he younger? Why was his surname different than my grandmother’s? Was he a half-brother? Was he still living? What was the key to unlocking my Mom’s memory about him? I wanted to know more, but I, also, wanted to stay on the trail of finding Lulu. One mystery at a time; his story would surface soon enough.

I returned to Lulu and asked my mother if she remembered anything more about her. She thought a moment and then asked, “Do you remember the time Grandpa came for a visit?” In my mind’s eye, I recalled a tall, imposing, white-haired man. He was standing by the kitchen door having just arrived from Florida for a short visit. He sported a short sleeved white cotton dress-shirt tucked into a pair of belted khaki-colored dress pants. That was the only time I recalled seeing him, but he was commanding enough to make an impression. My mother continued, “I called you ‘Lulu’ (which is my nickname) and with tears in his eyes and some urgency in his voice said, ‘What did you call her?!’” My mother remembered the pain in his voice as he explained that ‘Lulu’ was his nickname for his first wife. As I thought about his visit, I realized I must have been about 11 years old and that Grandpa's first wife had been dead for nearly 50 years. His love and sorrow had transcended decades. His loss had been great; his love the stuff stories are made of.

My desire to discover Lulu grew more intense. I felt a greater connection to my great-grandmother through the commonality of our shared nicknames. Feeling that I now had enough information, I made a plan to visit the archives in Trenton, New Jersey to dig up some documents. My trek there was made with my genealogy cohort and third cousin, John Caraccioli. He was on a quest of his own, but was just as interested in helping me uncover Lulu’s story as I was. His discovery would open the door to the entire story. (To be continued…)
Posted by LegacyRoots at 7:14 AM

To post a message simply use the Name/URL selection in the "Select profile" drop down menu, type your name (with or without a URL) then add your post.